What does it take to power our online habits and consumption?

An introduction to the world online

Tim Berners-Lee invented the World Wide Web in 1989, but given the fact that in 1990 only half a percent of the world’s population was online, the world on the web has grown astronomically.

By 2000, nearly half of the population in the United States were using the internet to gain information, but the majority of the world still had very little or no access to the internet. According to Our World in Data, 93% in the East Asia and Pacific region had zero online access, alongside 99% in South Asia and Sub-Saharan Africa.

In 2016, 76% of the US population were online, which seems quite a low figure when looking at the percentage of other country’s populations that were online around this time:

While online development saw rapid progress in these countries from 2000 to 2016, there are still some countries in the world where virtually nothing has changed since 1990. In countries such as Somalia, Eritrea, Niger and Madagascar, fewer than 5% of the population are online.

But still, the growth of access is rapidly increasing across the world, with a remarkable 640,000 new users appearing online for the first time on any given day over the last 5 years - this works out as 27,000 new users every hour.

Which countries have the most people online?

While China and India only have 50 and 26 percent of their population online respectively, they dominate the top two global spots. See the top 10 countries by number of internet users in 2020 below: 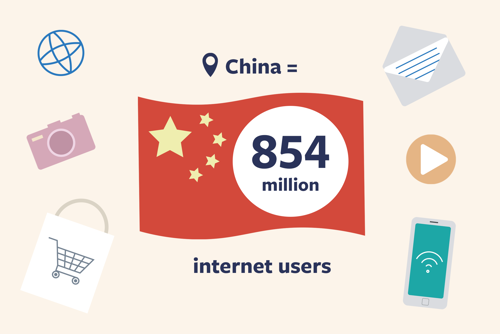 Measuring how much of a country’s population is online is one thing, but looking deeper into broadband access tells us much more about internet ownership and the number of consumers powering their online access. 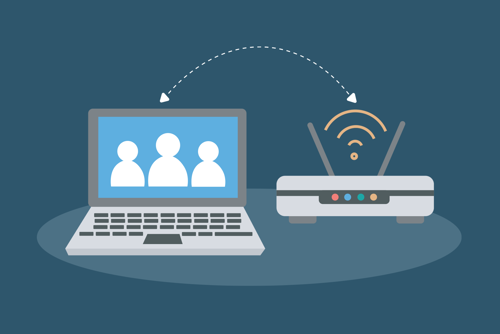 The following statistics are concerned with all modes of broadband, apart from mobile-cellular networks, referring to broadband speeds equal to or greater than 256 kbit/s. You can also read more about broadband speeds by visiting our sister site Broadband Finder, which has a number of useful guides covering the industry. 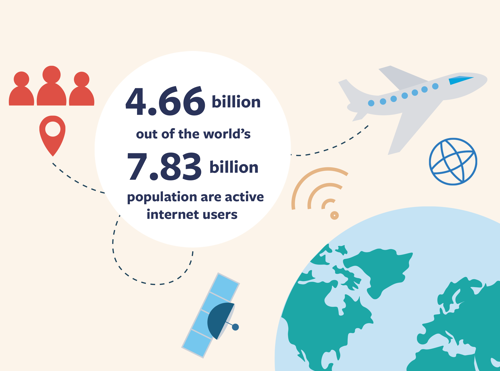 There are a lot more countries in between, and while we’ve offered a glimpse of the bottom 20 countries having access to broadband, there are some countries where broadband subscription data is not available, which can only suggest broadband ownership is obsolete.

Online habits and its energy consumption

Having gained an insight into the availability of the internet throughout the world, it’s now time to look at what it’s most frequently used for.

It’s of no surprise that just over half of all worldwide internet traffic (50.3%) generated in 2020 was done so using mobile phones - which is slightly lower than both 2018 and 2019, which saw 52.2% and 53.3% mobile traffic share respectively. This slight dip is thought to be due to the coronavirus pandemic, with more people working from home and most likely using desktops or laptops more so than mobile phones to access things such as email apps.

Daily time spent with the internet by device per capita is still heavily in the mobile phone’s favour, however, with Statista reporting that the average person spends 155 minutes on their phone daily, compared to just 37 minutes on a desktop computer.

It’s of no surprise that more than half of the world (4.66 billion) uses social media. It’s probably fair to say that if the necessary devices and the internet are available within a location, its population will use some form of social media.

As of January 2021, Facebook tops the charts with 2.74 billion users, followed by YouTube with 2.29 billion users and Facebook Messenger with 1.3 billion. Instagram had 1.22 billion users at the start of 2021, and Chinese messaging platform WeChat was the fifth most popular form of social media with 1.2 billion users.

It’s not just the power we as consumers use to run our devices, but the power-hungry data centres used behind the scenes to power our favourite “scroller” sites.

Take Facebook, for example. The company’s electricity usage has soared significantly in the last ten years. In 2011, it was taking 532GWh (gigawatt hours) to power the world’s most popular social media site. By 2019, Facebook was using a colossal 5140GWh (5.1 terawatt hours).

What’s the energy consumption of other social media giants?

But what exactly is crypto mining? “Mining” for cryptocurrency is extremely energy-consuming, as it involves optimised computers running constantly to crack calculations to verify transactions.

A BBC News article published in February 2021 stated that the collective energy consumption worldwide for mining cryptocurrencies exceeded the annual electricity usage of the whole of Argentina, according to analysis done by Cambridge University. Researchers said crypto mining consumes an estimated amount of 121.36 terawatt-hours of electricity a year, and will only increase the more cryptocurrencies increase in value.

With the rising value in cryptocurrencies, it’s not just the newcomers that will further increase electricity usage, but the ones who are already mining. As the value goes up, nothing is stopping current miners from rigging up more machines to mine crypto, creating some kind of crypto-mining farm in their own homes and fully taking advantage of the crypto surge that seems to be dominating the internet.

Other facts and statistics about cryptocurrency’s energy consumption:

The world is quickly transitioning to cloud storage, with the share of all data being stored on the cloud growing exponentially over the last five years.

The share of corporate data from organisations around the world in 2015 stood at 30%, which grew by 20% to 50% in just five years with the aim to improve both reliability and security.

While data centres around the world are required to power the cloud computing we take for granted, Pike Research, a clean technology market intelligence firm, suggests cloud computing could actually lead to a huge reduction in the world’s energy usage.

Pike estimates cloud storage growth will decrease energy “from the current rate of 201.8 terawatt hours to a 2020 rate of 139.8 TWh, resulting in a 28 percent reduction in greenhouse gas emissions in the next five years.”

While cloud-computing facilities still consume a colossal amount of power, they provide the service for many different customers, compared to enterprise data centres that are built, owned and operated by companies and are optimised solely for their end users - most often housed on the premise of the company itself.

The carbon footprint of the internet

When we think of carbon emissions, we think of the consumption of fossil fuels in things like transportation and industrial processes. Do we ever think of the internet? Contributing to only 3.7% of the world’s global carbon emissions, it’s not considered a major threat to the welfare of our planet, but with how much the internet is growing, we should remain aware of its effects.

Below are some statistics about the effects our persistent use of the internet is having on the environment.

Are the big companies doing anything to minimise environmental damage?

The most important thing to note with the environment, is it’s never too late to start making changes, and thankfully, massive names across the globe have started to take responsibility for the millions of tonnes of CO2 emissions they’ve released into the atmosphere.

In 2018, Apple became both powered completely by 100% renewable electricity and carbon neutral. This not only includes Apple’s data centres and offices, but also their retail shops around the world in 43 different countries. Google achieved the same, but a year prior in 2017, with Facebook following suit, having supported all operations with 100% renewable energy since 2020.

However, one of the biggest drivers of CO2 emissions of the online world lies with online video streaming. It’s been claimed and supported by various sources that watching 30 minutes of your favourite Netflix show is the equivalent to driving 4 miles, with just half an hour of Netflix streaming generating 1.6kg of CO2. In a statement issued by the streaming goliath in 2019, Netflix said it was committed to reducing its environmental impact by matching 100% of the electricity they use with regional renewable energy certificates. This doesn’t, of course, take into account the electricity consumers are using to stream hours of movies and television series, but that is in the hands of we consumers, and is something that’s easily solved with the UK energy market now offering a plethora of green-energy deals at exactly the same rate as a standard energy deal.

An article by Fact Source ran some figures and discovered that the annual global energy usage of YouTube could power every single American home for about 8 years - or one American home for 2 billion years. We’ll let you decide which one sounds most impressive. But if you didn’t know, YouTube is actually owned by Google, who we’ve previously said powers its data centres with 100% green energy, so there’s nothing to worry about here.

We haven’t mentioned Amazon much, and that might be because it refuses to publish figures about its operations. Spokespeople for Amazon have said it’s because the company’s infrastructure is much more complicated than your regular business, with many different elements such as the delivery network that provides goods to consumers constantly. However, it has been mentioned that Amazon hopes to power its entire operation with renewable energy by 2025, and to be net-zero by 2040, so it’s probably safe to say they are a long way behind the other big names we’ve mentioned.

How can we help reduce the internet’s carbon footprint?

An individual’s impact on the environment through internet-use pales in comparison to the colossal amount of carbon dioxide emitted by the biggest names in technology. So, can we actually do anything?

Well it’s the same as recycling efforts and powering your home with 100% renewable energy - if everyone took the time to be cautious, of course it’d make a difference.

There are some mindful tech habits you could get into the groove of that would help reduce your own carbon footprint, and if we all adopted them, could make the world of difference. But, the carbon footprint of our gadgets, the internet and other systems account for 3.7% of all global emissions, which is a product of every internet user in the world; so it’d take some doing to instil mindful tech habits into each and every one of them.

To be more mindful of the environment with your technology, you could:

Did you know, it’s up to the suppliers to source their own renewable energy, and feed it back into the UK energy grid? So essentially, any electricity you use is put back into the grid by your supplier in the form of renewably generated energy from a variety of sources, to the point where (hopefully) the whole grid will be flowing full of green energy.

Very few suppliers offer 100% green gas, but a lot of them will offset any gas you use by funding various sustainability projects around the globe, which also help to create jobs in less-developed areas.

Once you’ve chosen and switched to your green deal, it works just like any other energy tariff. You can sit back knowing the energy you’re using to power all your technology is coming from renewable means such as solar panels and wind power, rather than planet-harming fossil fuels.