The Crown properties rack up £2m in energy bills

We've worked out how much energy the properties that feature in The Crown use, and it's a lot.

The energy bills of the stunning properties featured in the new season of The Crown are estimated to cost up to a combined total of £2,261,196 a year!

Our analysis of the energy costs for the royals shows that the buildings expected to feature prominently in season four of The Crown - including Diana’s family estate Althorp House - are estimated to cost up to a combined £2,261,196 a year in gas and electricity bills.

Out of all the historic buildings to feature in the hugely popular series based on the British Royal Family, Buckingham Palace is unsurprisingly holding the number one spot, with an estimated annual energy bill of £1,078,470, making up almost half of the bills of all the properties.

Windsor castle comes in with the second most expensive energy bills, with Althorp House sitting in third. The table below shows the largest estimated energy bills, broken down by royal property.

The Royal Household has implemented an Energy Management Strategy, thus far helping improve the energy efficiency of these buildings by 40% - achieving a 24% reduction in heating and lighting last year.

It's not just environmental savings to be had, either, as Buckingham Palace, for instance, could save £299,487 each year by switching to the most competitive fixed rate energy deal. Across the ten properties, switching to a better deal would save an impressive £627,926 each year!

Tom Lyon, Director of Energy here at Energy Helpline, comments: “It’s fair to say that we all love watching The Crown and getting a look inside these grand homes and, considering the size and age of these impressive buildings, it’s perhaps little wonder that their energy bills will be equally grand."

“For example, some of Buckingham Palace’s radiators are over sixty years old, and the electrical cabling and heating date from the 1950s. But with measures like installing LED lighting which uses up to 86% less electricity across the estate, it’s incredible to see the environmental and cost-savings being made."

“While the energy bills for these historic and large buildings will be eye-wateringly high, moving to a fixed rate deal in our own homes is one of the easiest ways to cut bills, with the average person saving a sizeable £289 per year by switching.” 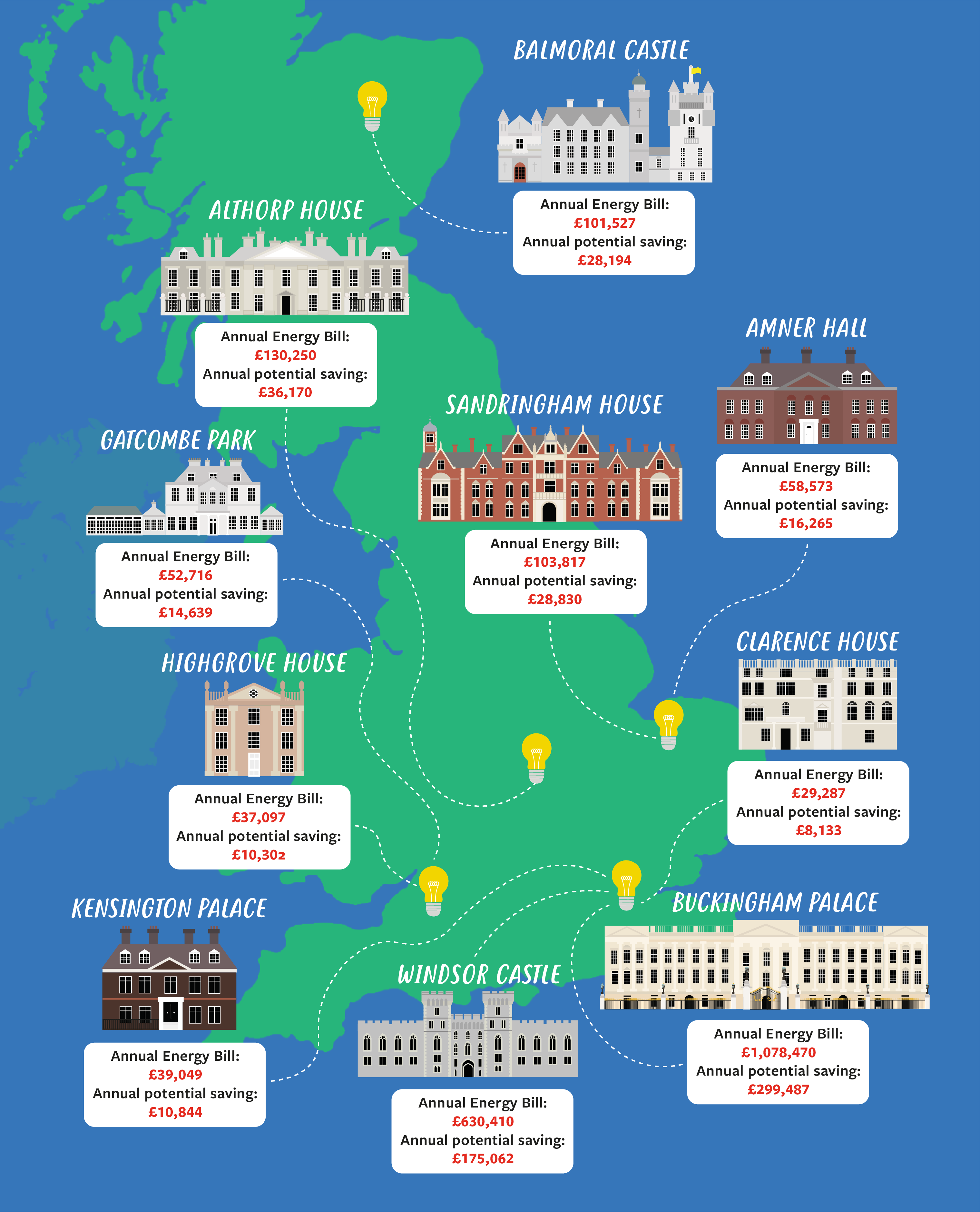